The Storybook of Legends 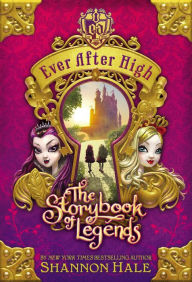 You may also want to look at these other trailers:
The Storybook of Legends

At Ever After High, an enchanting boarding school, the children of fairytale legends prepare themselves to fulfill their destinies as the next generation of Snow Whites, Prince Charmings and Evil Queens...whether they want to or not. Each year on Legacy Day, students sign the Storybook of Legends to seal their scripted fates. For generations, the Village of Book End has whispered that refusing to sign means The End-both for a story and for a life.

As the daughter of the Evil Queen, Raven Queen's destiny is to follow in her mother's wicked footsteps, but evil is so not Raven's style. She's starting to wonder, what if she rewrote her own story? The royal Apple White, daughter of the Fairest of Them All, has a happy ever after planned for herself, but it depends upon Raven feeding her a poison apple in their future.

What if Raven doesn't sign the Storybook of Legends? It could mean a happily never after for them both.
-Summary from Amazon
Teachers / Librarians:

Want to add this book trailer into your catalog? Click this button to copy a link to add into the 856 tagline of the MARC record.

Copy the link below to add into the 856 tagline of the MARC record: